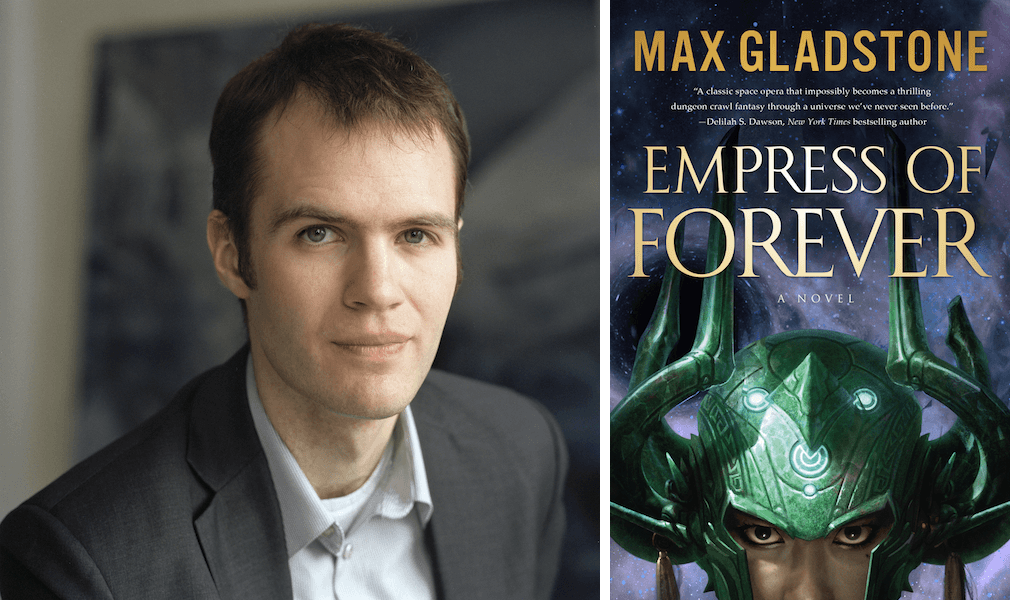 A space opera of world building, world destroying, planet eaters, strange goddesses who stride across space, like the Suicide Sisters, and a “ragtag” group, united by a mission – Empress of Forever by Max Gladstone is a mashup of Star Wars and a complex video game, all brought to life with words rather than actual graphics.

Viv knows only Earth. She is a businesswoman. She has not been truly ruthless, but she has been heedless of other’s feelings as she climbed her way to the top of the business world. Just as she is in an enormous server room about to finish uploading a program which could give her dominion over her world, the Empress of Forever, very green and powerful in ways Viv has never even imagined reaches in and grabs ahold of Viv’s heart and zaps her into a place in space called High Cacereal. How is Viv still alive? How will Viv get home? How will she get back to Magda to make sure she is safe? How will she find out what happened when she sent out her virus before it was completely loaded?

Well the answers to those questions will not be quick in coming. Viv first saves the Empress’s enemy Zanj, a feisty space pirate who has been imprisoned for 3,000 years, one of the once-famous Suicide Sisters. Zanj, never one to sit still can use the Cloud to travel through space. The first of the group hunting the Empress that Zanj and Viv meet is the loveable Hong, a monk with lots of courage and common sense. Then Xiara of the piloting Ornclan is added, and Gray of the Grayframes. Of course our band of Empress-haters must travel to every corner of Max Gladstone’s  and Zanj’s world to see the damage the Empress has wrought.

Since Viv arrives in this world from the world of business she brings with her the wisdom success in business has taught her. This blend of How-to-Succeed-in- Business book lore, self-help psychological teachings, warcraft, and science fiction is kind of dazzling. How do people think up this stuff? It’s Linked in, Instagram, and World of Warcraft all rolled into one.

Despite this odd marriage of disciplines, Max brings his fantasy-built world richly alive for us. The novel is fun to read and as Viv learns the lesson that would have sealed her success as a businesswoman or made winning irrelevant, so do we. There is no I in team, but having the support of a truly connected team allows you to realize the very best version of yourself. Empress of Forever introduced me to a whole other kind of fantasy/science fiction novel for the computer age, perhaps intended for younger readers. Still, I found it fascinating to see how the genre is being transformed, and I made some new fictional friends.