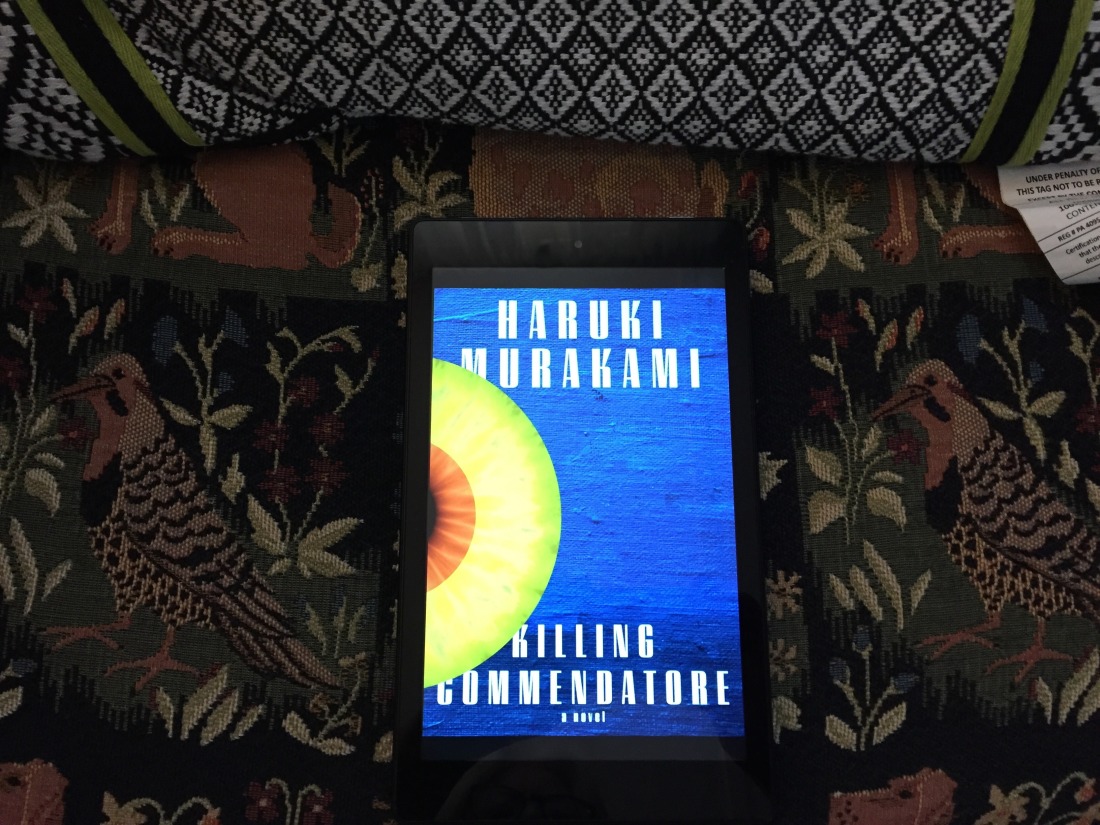 “Beware the double metaphors”, our artist, our main character, our guy in an early mid-life crisis is told by the Commendatore. Haruki Murakami bends our brains in fiction once again and his readers, and I, enjoy every minute.

Killing Commendatore by Haruki Murakami does something several books have done recently. It begins at the end and then fills us in. Of course by the time I immerse myself in this story I forget that it is all a flashback. The end of the story we get in the beginning is hardly definitive. But we do meet the artist, acting like a true artist in that little scene.

In present time (in the novel) he is feeling that his life has robbed him of the excitement and ambitions he once had as an artist. He, in a way, blames his wife. He rationalizes that he has had to be practical since he is a family man. He earns his living painting portraits and as his wife works away from home and he is often working at home, he does most of the housework. He feels he has “sold out” by painting portraits, which he considers a lesser form of art. He is feeling dead inside. Just when he is most dissatisfied with life and his art his wife asks for a divorce, says she is sleeping with another man and will not sleep with two men at once.

Yuzu’s husband (the artist) grabs a few clothes (very few) and begins a long journey in his car along the northern coast of Japan. Until he begins naming roads he could be living anywhere. He could be any modern man in any modern nation. He ends his journey months later when he has a very strange and concerning sexual encounter with a young woman and meets the possibly evil man in the white Subaru Forester.

His old college friend and fellow student Masahiko offers him the small mountain house where his father, the famous artist Tomahiko Amada, who is now in a nursing home with dementia, had his studio. Masahiko cannot care for the home as he works and lives in Tokyo.

Up to now. I must say, our artist (unnamed) seems more like an engineer. He has a very pragmatic approach to his wife’s confessions and his road trip. But Haruki Murakami paints his portrait with words. Our guy cannot have a boring identity crisis or get to know himself without going through an ordeal.

From the time he enters that mountain home his inner journey begins and it is a doozy. Temple bells ring in the dead of night with no temple nearby, a deep and magical pit is uncovered with meticulous and unusual stonework walls. There is a secret painting Tomahiko Amada has hidden in the attic with the pretty little owl, there is a collection of opera and classical music on vinyl, and there is a millionaire neighbor with a purring silver Jaguar (car) and many secrets. Then there is the young girl, Mariye, he meets in his children’s art class (about the same age as his beloved sister, Komi, who died as a young teen) and the older, married woman from his adult art class who we get to observe, along with the Commendatore, having satisfying illicit sexual relations with her teacher. Who is the Commendatore and how does he get killed? That I cannot tell you.

There is no blatant spirituality and our artist seems far too self-absorbed and modern to accommodate a deeply religious life, but, even so, in this novel the symbolism (the temple bell, the little shrine, the pit) and a certain sparseness in the prose give a religious tone to the artist’s inward journey. Whether it strikes you as spiritual or not, you can at least enjoy the novel as one great big entertaining Haruki Murakami double metaphor.