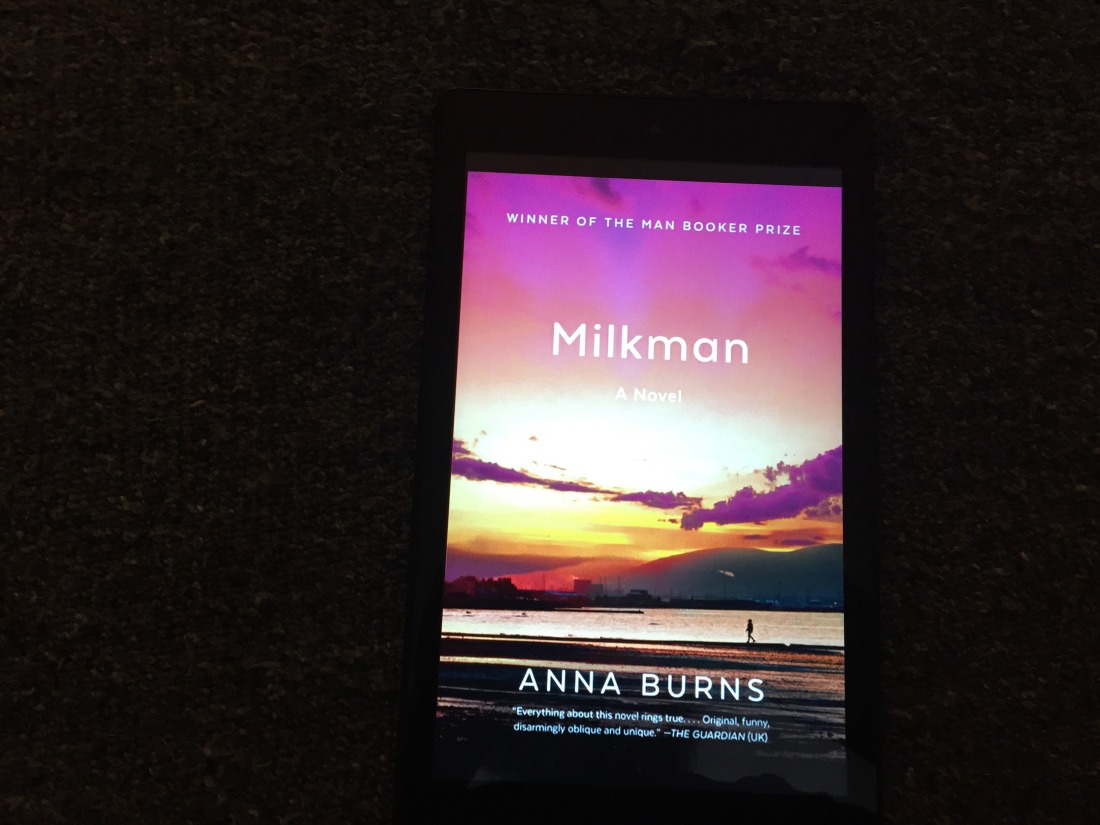 Milkman by Anna Burns follows none of the rules for storytelling or literary fiction that we are used to. The novel seems to be written as one long sentence (of course it isn’t really). I enjoy reading authors who try something new, especially if they do it well. Anna Burns does it well enough.

Middle sister comes of age in a divided culture, almost a tabloid culture. It is a paranoid, male-dominated place in a perpetual state of war (although most of the fighting happens elsewhere) with the “over the border”, “across the waters” people. Readers identify this unnamed country as Northern Ireland because Middle sister speaks of the on-going hostilities as ‘the troubles’. Men are either renouncers, soldiers, paramilitaries or police. Terrorist bombs from unidentified groups occasionally plague the residents and acts of personal terror up to and including death happen frequently enough to keep people on edge. Toxic masculinity is the expected male behavior. Of course, not all men conform but those who don’t are not allowed much peace by those who enforce the convoluted code these folks live with.

Middle sister is also maybe-girlfriend to her car loving mechanic, maybe-boyfriend, who seems nice and who says he would like to not be a ‘maybe’ anymore. Middle sister has her own reasons for wanting to remain a ‘maybe’ for now. Middle sister does things that make her stand out in a culture where women especially are not supposed to stand out. She reads books while walking (nothing newer than the 19th century). Now that she is of marriageable age her behavior is considered deliberately provocative. She is not being properly observant of possible dangers. She is too self-absorbed. She attracts the attention of the creepy, middle-aged Milkman (who is not the real Milkman).

Around her in her single state swings the true chaos of this time and this place. Young people go to bars to drink and mingle – not to dance it seems. Some bars cater to only one group for example, the paramilitary, others attract a more mixed group –  a more dangerous situation with violent fights and explosions more likely. Once Milkman shows an interest in Middle sister other men in the bar scene back off and certain women begin to offer her tips about what to wear and how to act.

Her relationship with maybe-boyfriend continues as he is not part of the mainstream toxic male culture. Middle sister is seriously weirded out by Milkman. She no longer walks and reads. She now runs with Third brother-in-law rather than alone. She knows better than to get in Milkman’s cars or his van. Because of Milkman’s attentions Middle sister becomes an object of gossip because rumor has it that she is having an affair with this Milkman. Until her recent difficulties she did not see herself as belonging or identifying with these grown up mothers (including her own) and widows (lots of widows). As her fate gets more precarious she begins to learn of the subtle power these women have.

Maybe-boyfriend, the car guy, wins ownership of a ‘Blown Bentley’ engine from over the water. Gossips claim that he got to keep the bit with the flag (not the right flag), but he didn’t. Eventually Milkman uses this gossip to threaten maybe-boyfriend whenever he runs into Middle sister – not often if she can help it. He talks about “car bombs”. He’s a real subtle guy.

Some may find this book difficult to read, although words, at first, tend to be short and simple. The breakneck pace lacks pauses or temporary stops, and the vague war between basically unidentified enemies, all the jargon of a carefully controlled society, gets repetitive and makes us long for some specificity. But Middle sister makes the perfect protagonist because, although she knows the rules, she doesn’t always follow them. She is bright, and cautiously adventurous. On occasion her internal dialogue breaks away from the monosyllabic argot and reveals some pretty sophisticated language skills. Of course she was a girl who read books while walking.

Creating a world, or even turning a real world place into something more generic, is not always easy if it is to be a believable world that readers want to occupy for a time. For me the world of Middle sister in Milkman by Anna Burns was well done. But see what you think about that ending.