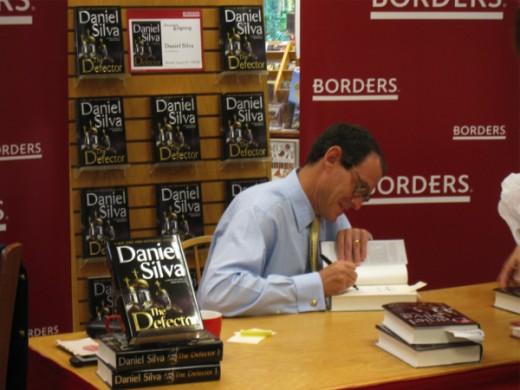 In order to fully understand The Defector (Bk. 9, Gabriel Allon Series) by Daniel Silva it is helpful to recall the events at the end of Moscow Rules (Bk. 8, Gabriel Allon Series). Gabriel manages to escape from Russia (barely) with a Russian journalist, Olga Sukhova, whose colleagues have been assassinated, and with a man, Grigori Bulganov, who saved Gabriel’s life by making sure he did not die in Lubyanka, the Russian prison.

In The Defector we find out what Bulganov is up to in his new home, London. Silva, Daniel Silva, the author, calls London a Russian city because so many dispossessed Russians live there. Olga Sukhova, also in London with a new identity, is keeping a low profile. But Grigori is tempted out of hiding by another Russian who lives the high life in London.

When Grigori disappears on his way to a Chess game, Graham Seymour, head of British Intelligence, is not terribly upset. He decides that Grigori has become homesick and has “un” defected. However, when Gabriel Allon hears that Grigori is gone he has a different reaction. For one thing he knows that a very bad and powerful oligarch, Ivan Kharkov is still alive and well, although he has to stay in Russia for now. Gabriel also knows that he was able to help Ivan’s ex-wife Elena liberate some of Ivan’s money ($20 million) from a Swiss Bank. Since Elena is in protective custody in an unknown location with the couple’s two children, she needs that money. But you can imagine how much Ivan wants to get his hands on Elena, his children, and Gabriel. Since he can’t leave Russia right now, he must find a way to bring everyone to him.

Ivan Kharkov is a stone-cold bully boy who makes his money selling Russian weapons to people the rest of the world wants to keep weapons away from. Ivan’s hero is Stalin and he strives to model his behavior on the cruelty Stalin used as he purged (killed or tortured) any Russian citizen who he imagined might harbor sentients against his government (regime). Ivan managed to buy the dacha that once was Stalin’s summer home. Ivan uses his dacha to reenact Stalin’s bloody purges on a smaller scale.

When Gabriel doesn’t react right away to the disappearance of Grigori Ivan takes someone else and who he takes definitely gets Gabriel and his team moving.

Daniel Silva and his Israeli spy, Gabriel Allon, along with his team of Israeli operatives, expose bad actors all around Europe and the Middle East and offer up the satisfaction of giving them what they deserve in fiction, even though we often do not experience such justice in real life. When The Defector ends are we finally shut of Ivan Kharkov? My lips are sealed.

In notes at the conclusion of The Defector, Silva connects his fictional spy story to actual historical events that inspired it.

“There, from August 1937 to October 1938, an estimated twenty thousand people were shot in the back of the head and buried in long mass graves. I visited the recently opened memorial at Butovo with my family in the summer of 2007 while researching Moscow Rules, and in large measure it inspired The Defector. One question haunted me as I walked slowly past the burial trenches, accompanied by weeping Russian citizens. Why are there not more places like this? Places where ordinary Russians can see evidence of Stalin’s unimaginable crimes with their own eyes. The answer, of course, is that the rulers of the New Russia are not terribly interesting in exposing the sins of the Soviet past. On the contrary, they are engaged in a carefully orchestrated endeavor to airbrush away its most repulsive aspects while celebrating it achievements. The NKVD, which carried out the Great Terror at Stalin’s behest, was the forerunner of the KGB. And former officers of the KGB, including Vladimir Putin himself, are now running Russia.” -Author’s Note