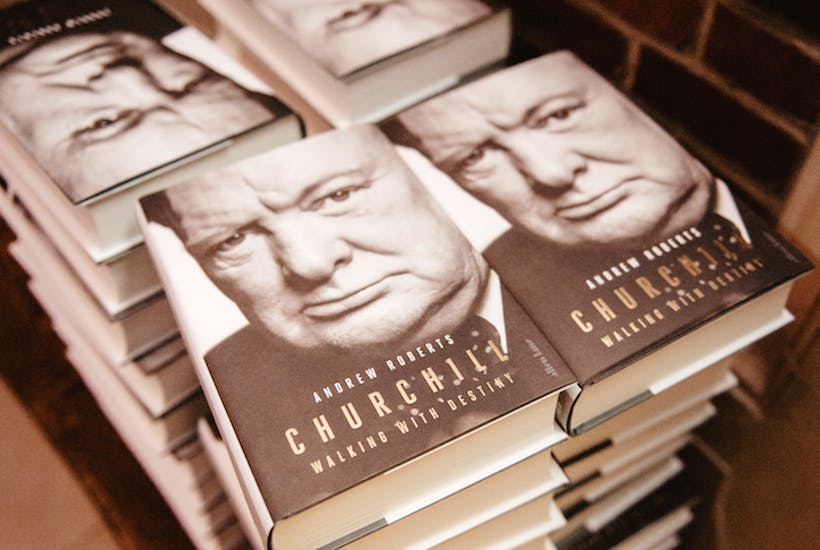 Andrew Roberts, in his biography Churchill: Walking With Destinytells us that Churchill was not ubiquitously or universally beloved, until he was. As he tells it even Churchill’s detractors enjoyed his wit, his oratory, and his intelligence. Having just spent over a month in the company of Winston Churchill, and an enormous cast of famous cohorts, I am surprised and almost sorry to find myself back in the weird politics and tenuous peace of the 21 st century.

Churchill was born in Blenheim Palace into the family of the Duke of Marlborough, a family whose most famous member was known to have been an excellent military strategist. Randolph Churchill, Winston’s father was the third son of the 7th Duke of Marlborough. Churchill seems to have been born with an interest in military matters. He studied what was known about his ancestor and he wrote a book about him. In fact, Churchill was a prodigious writer and authored many books now considered classics. He also studied the life and battles of Napoleon. He was in the cavalry for his own military service and, on a hiatus from politics he served in the trenches in France in the Great War (which we call WW I).

Churchill was born at the end of the Victorian Age and lived until the 1960’s. The changes in politics and wars were dizzying and many of his contemporaries held onto the “old rules” they learned as children. Churchill was an unruly child, a challenge for the schoolmasters at the very aristocratic schools he attended. Roberts suggests that Churchill was an original who had no problems with the changes he lived through because he was never a rule-follower. He further marshalls the facts of Churchill’s life in such a way as to suggest that Churchill was born to lead the UK into war against Hitler. Churchill believed that he was safe from harm because he was destined for some greatness which made him seem almost fearless. The author suggests that Churchill could never guess what moment he was destined for so he tried to be a great man all his life. This occasionally ticked everyone off, especially some in both the Conservative and the Labor parties in Parliament. Churchill did not want to serve in the House of Lords. He never worried about not being a Lord like his parent, and he never accepted the title, because he would not have been able to serve in the Commons as he wished.

Roberts’ book is close to 1,000 pages long, longer if you count the photo section, the footnotes, the bibliography and the index. By the time Roberts, a respected and prize-winning British historical writer, tackled Churchill’s biography he had access to documents previous biographers never had. He had official papers but also the diaries of almost everyone who had known Churchill. I found myself interested in how British politics differs somewhat from our democracy, interested in Churchill’s political ups and downs, in his political and military successes and failures. Along with the public side of Churchill’s life, the diaries of his contemporaries, his secretaries and aides, his wife Clementine, and even occasionally his children give Roberts and us access to the private side of his life, even some gossipy bits.

If Churchill was destined for any one time it was 1939-1945, the World War that we call World War II. Truly the entire world was involved in this terrible conflagration with Hitler and his Germans, and the Japanese as instigators, and Russia under Joe Stalin as our rather frightening ally. Roberts makes us understand what we owe Winston Churchill, who almost single-handedly encouraged his Brits to stay in the war, a war they only believed they could win because Churchill kept telling them so. He had faith that America would eventually have to come into the war and, although he hated Communism, he set that aside so Russia would also be an ally. Although Russia gave everyone big headaches after the war, if millions of Russians hadn’t died to beat back Hitler, Churchill and all the British people could not have held Hitler off long enough for America to come into the war. Without Churchill and, indeed, without Russia, World War II could have been a tragic turning point for democracy and humanity, and Andrew Roberts makes that very clear.

I have barely scratched the surface and the depth of Churchill’s life, but Andrew Roberts does. I say “bravo”. I highly recommend that reader’s spend some time with Churchill : Walking with Destiny. I doubt if it will take a month. I was dealing with some other challenges at the time. This is one of those books that becomes a part of you. I will make my highlighting public, but I will warn you it is voluminous. It might be easier just to read the book.

Please find me on goodreads.com as Nancy Brisson and on www.tremr.comas brissioni and at https://nbrissonbookblog.com/