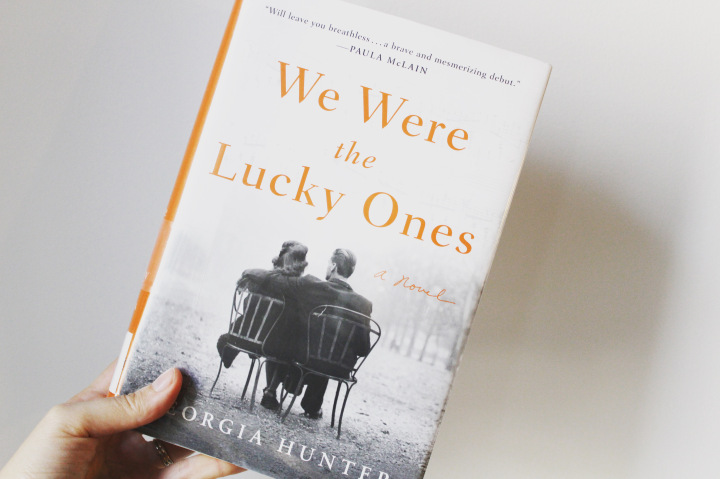 We meet the Kurc (Kur-see) family in Rodam, Poland in 1939. Hitler is on the move and we know what is coming, but this close-knit family of middle class Jewish Poles does not. We Were the Lucky Ones by Georgia Hunter, covers familiar and dreaded ground, but this is a family of survivors. How did that happen?

Not one of these five siblings or their parents ended up at a concentration camp. They saw that Jews were being rounded up. They saw the railroad cars crammed with frightened humans supposedly going off to work in war factories. How is it that of the five (Addy, Halina, Bella, Genek, and Mila) and their parents only Mila ended up on such a train and she managed to escape a truly traumatic fate. They did not collaborate, they did not thrive; they worked almost to breaking in factories, subsisted on little food and sometimes no food. They often did not know where their other siblings were and they missed their family terribly, and worried about each other all the time.

The book skips between siblings and their spouses so we know where the Kurc’s are and how close they came to discovery and death, but they only learn this after the war when they all meet their son/brother Addy in Brazil. Georgia Hunter, the author, is Addy’s grandchild. He married a woman in Brazil who was from the American South. How did he get to Brazil?

Dumb luck and many delays, near capture, and the ability to anticipate and avoid being trapped helped Addy survive. He learned the name of a man who was supplying visas to Jews so they could leave Europe. He went to see this man and ended up on one of the last ships to Brazil. Even so all aboard the ship got rerouted to Casablanca and Addy almost ended up being caught there with an expired visa and sent back to Europe. This is just one of the family’s survival stories. The rest are just as compelling although told more as history than drama.

Georgia wrote a fictional story for the sake of flow and form and character development, but this is essentially a true story she researched for a decade, interviewing family, visiting museums and Holocaust data centers. Her family, whose stories she tells in We Were the Lucky Ones, may have only survived because they did not stay in one place and they were willing to learn new languages, buy papers that said they were Catholic, and because they were the recipients of favors from non-Jewish Europeans.

I don’t know why stories about WW II and the Holocaust keep falling into my hands, but this period in human history was a time when heroes and villains reigned. This was a time when what we learned about human nature was that we could succumb to a sickness of the spirit, to our most negative traits, envy, fear of others, national pride, genocide; or resist and become our better selves. Such books have special relevance in 2018 when we are in the midst of dealing with our fear of Muslims and “the others”, inclined to isolationism, and fomented to an exaggerated nationalism similar to what sent the German people so spectacularly and disgustingly awry in those WW II years.

Every time I read about WW II I learn something I did not know and feel things that I would not have felt otherwise. This may not be a perfect book; but it’s a very good debut and a great addition to the growing library of books about WW II for Jews in Europe.

Photo Credit: Book and a View