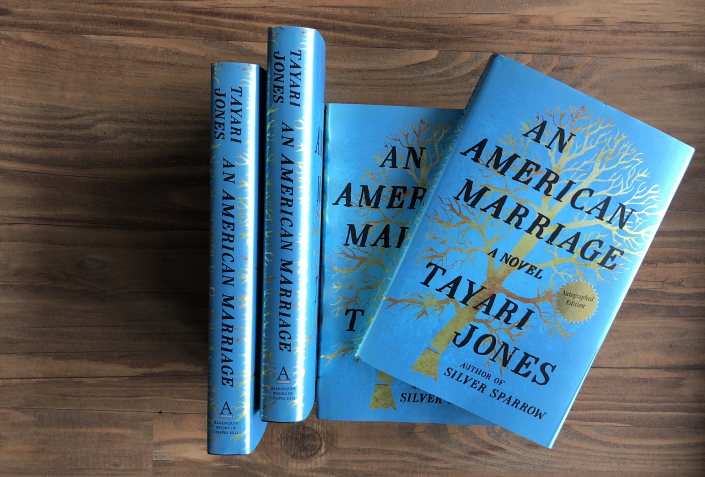 Oprah chooses book club books that explore social and cultural issues, sometimes very graphic abuses. Her choices can be quite literary and even somewhat gritty. I have not always kept up with Oprah’s book choices because I have my own lists that I can never seem to keep up with, but I did decide to read her latest choice, An American Marriage by Tayari Jones. We meet Roy Othaniel Hamilton in the first chapter and right away his language patterns make him unique and interesting. In the next chapter we meet his wife Celestial (nicknamed Georgia). Roy comes from a country family, not farmers, but a family from a small rural town in Louisiana. Celestial grew up in Atlanta, Georgia in a more upscale family, although her parents have divorced and her father has married the woman he was having an affair with. Both Roy and Celestial have attended classic African American colleges, Morehouse and Spelman. They meet through Celestial’s friend, and neighbor since childhood, Andre.

These two are only married for moments (about one year) before something awful drives them apart, something that is terrible because it is so racist and unexpected. Although this might happen to a white couple the odds against it are astronomical. However, if even one person in a marriage is black this can and does still happen in America. Roy is accused of raping a woman at a motel where he is staying with Georgia. His wife knows he is not guilty because they were together all night but the woman is so emotional and so certain that he is the one that he is sentenced to twelve years in prison.

Celestial has a career, she has a way to survive. At first she writes Roy every day and sees him as often as possible. But life happens. She makes sure he has money in his prison account and an uncle works on Roy’s appeal. When Roy gets out of prison after only five years, Celestial has already moved on but has not told Roy because she is so conflicted about it. There are some very emotional moments when Roy is released from prison that I cannot tell you about.

Although this book speaks to the dynamic in a marriage especially when a geographical separation takes place in a marriage, it also speaks to the overwhelming imbalance between incarceration for Americans of African Descent and other Americans. It is entirely possible that this is something many marriages in the black community have to deal with. The book doesn’t make a big deal of this demographic anomaly, but if you are aware of it then it is there in the back of your mind.

An American Marriage is much more than a classic novel about a marriage. It does not push the issue of racism, but it’s in there. It doesn’t push the fear that many people of color carry with them that they could be falsely arrested or even killed just for being black, but we feel it. It doesn’t go into detail about the way law enforcers sometimes go nuts if they think a black man has committed a crime against a white woman (in fact we do not even know for sure if the woman at the motel is white) but we are witnesses to it.

However Tayari Jones’ novel also stands as a story about a man and a woman and a marriage. In this sense it can be read at more than one level. So if you tend to avoid fiction that is loosely disguised social commentary you don’t have to eliminate An American Marriage by Tayari Jones. I believe that most likely you will enjoy it as much as any other offbeat love story.

Still I don’t think Oprah chose it because it is just a uniquely American love story, or a uniquely modern love story. It should shock us all that what happened to Roy and Celestial is still a thing that could happen in America in the 21stcentury, along with other racist actions perpetrated in the name of law and order but having little to do with the subject. It will be very telling when a romance between people of color does not need to come with an undercurrent of social injustice, if that ever happens.