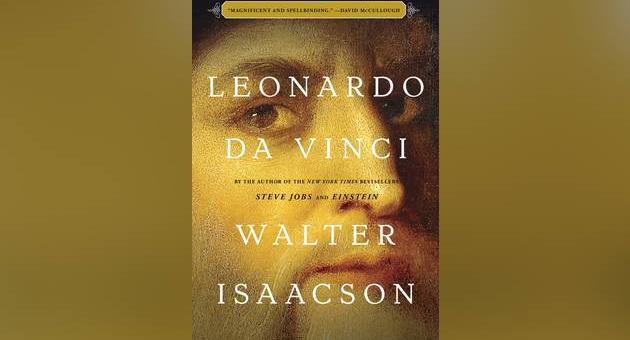 If your eyes and heart were opened to a whole new world filled with oil paints, and tempura, gouache, symbolism, and the subject matter of artists you were probably in your first art history class. It was a revelation that you could watch slides and listen to a professor speak about them and come away with a head full of images that lit up your mind, slapped a smile on your face and made you long for the great museums of NYC and Paris.

This is the place that Walter Isaacson takes you to in his book Leonardo Da Vinci. He puts us back in that art history class as he walks us through the details of Da Vinci’s paintings. There are color plates (even on a Kindle).

However, Leonardo was not first and foremost a painter, although that is certainly one way we remember him. After all, he did paint the Last Supper and the Mona Lisa. Leonardo, it seems, was not in love with painting and left many works unfinished. His mind saw all the components of the physical world that needed to be comprehended at great depth in order to make someone a great artist. He spent years dissecting cadavers and made exquisitely detailed anatomy drawings. He wanted to see inside eyes, brains, hearts and he drew very sophisticated conclusions about how bodies work. He studied rocks, birds (to learn about flight) and, in excruciating detail, the movements of water. He studied optics and perspective.

Yes, all of these things relate to art, but they relate even more to physics and engineering. I will leave it to Isaacson to tell you some of the other unique things Da Vinci wanted to know. Leonardo also loved theatrics and building machines for special dramatic effects. In this way he entertained kings and rulers and participated socially in the entertainments of the times, while always searching for a patron to help support his activities, his household, and the students who came to work in his workshop. He was not wealthy, being the illegitimate son of a notary.

Sadly for us, Leonardo was so often enticed by ever newer areas of exploration that he never published his enormous treasure trove of notebooks and he left it to others to receive credit for his discoveries. Perhaps it was because he was left handed and all his notations were made in mirror writing (he wrote from right to left). The idea of ancient aliens who came to earth when men were still quite primitive is now the subject of the Ancient Aliens television series, but I remember running across it years ago. Several times as I read about Da Vinci I thought he might be a distant offspring of such a technologically advanced alien visitor. Walter Isaacson is a true academic though and he said no such thing. He does not deal in conjecture and gives attributions for almost every point he makes in a fairly extensive set of footnotes at the end to the text. There is also a useful index to take you back to sections you want to review.

Isaacson is both a biographer and an art critic, as well as a fan of Leonardo and his book is not at all difficult to read. He doesn’t get bogged down in academia and he clearly wants us to share his admiration for Leonardo Da Vinci. It is a book to read in quiet moments with a nice cup of something warm or on a park bench with your bottled water while taking a break in your daily walk. A chance to dawdle in the 14th and 15th century as Leonardo pursues his life and his art, while wandering Italian towns in his rose colored robes, is the gift that Walter Isaacson gives us.